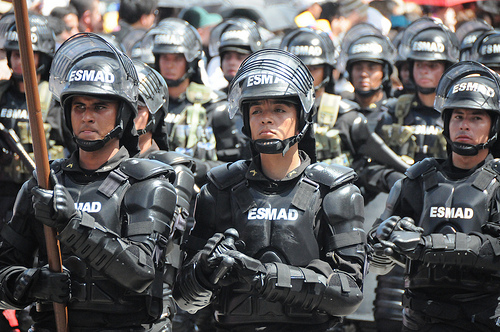 On October 5, the Second Committee of the Senate and the House of Representatives ruled in favor of the reform of the National Police Code and the creation of the disciplinary statute promoted by the government. However, another bill resisted by the government could be debated in the next few days. It deals with the dismantling of the Mobile Anti-Riot Squad (ESMAD in Spanish) and its replacement by a Special Unit of Dialogue and Police Mediation.

The treatment of the bill takes place in the midst of new denunciations by citizens against the repressive actions of the ESMAD, after videos went viral showing police officers shooting repeatedly at demonstrators with a Venom device (a lethal weapon) on September 28 during the National Strike.

The actions of the squadron have been strongly questioned since the 2019 protests and today many CSOs and international stakeholders have been demanding its dismantling. During this last year, the opposition senator Antonio Sanguino (Alianza Verde) had already tried to have the issue addressed on the floor, however, he did not get the necessary support.

This time he might have a chance despite the defense of the work of the police force by Vice President Marta Lucía Ramírez and President Iván Duque. The government, for its part, is promoting its own police reform bill. Strictly speaking, it consists of two initiatives, the creation of a disciplinary statute for the police forces, passed by the named Committees on October 5, and the Career and Professionalization Statute Bill, which has not yet advanced in Congress. It is to be expected that the pro-government bloc aims for the discussion to be articulated around the latter.

In the same line, on September 23, the President issued a decree modifying the Commission of the Plan of Opportune Action (PAO in Spanish), creating a Social Committee and an Operative Committee, to follow up the cases of homicides against human rights defenders together with an Interinstitutional Board.