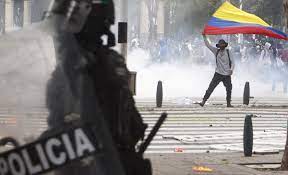 Police reform: a long overdue issue brought to the fore by the National Strike

The death toll from police crackdowns on protests since April already exceeds 50 according to Indepaz and the NGO Temblores, while official sources put the figure at 27. With this, an issue that was high on the agenda in 2019 has gained renewed profile: the need to reform the National Police and the Mobile Anti-Riot Squad (ESMAD, in Spanish).

Last year, opposition senators promoted a bill aimed at strengthening the civilian character of the police force, which, as of today, continues to be under the orbit of the Ministry of Defense. The initiative was introduced in October 2020, after the demonstrations of September of that year, in which 7 people lost their lives and 200 others were injured.

The bill proposes the need for the National Police to come under the Ministry of the Interior, and seeks to regulate the use of force and lethal weapons in procedures, as well as to establish parameters for the registration of persons, goods and means of transportation. It also contemplates the creation of a National System of Citizen Participation to channel the “different sectorial and regional interests related to the police service, the exercise of citizens’ rights and citizen security”.

In this way, it aims at overcoming the military perspective in the use of public force which the authors of the bill claim is used by the police forces to repress protests. In the same line, the actions of the ESMAD have been strongly questioned, as they have been pointed out for the indiscriminate use of lethal weapons, arbitrary detentions and beatings.

Civil society, on the other hand, asked the Supreme Court to declare the government’s non-compliance with a September 2020 ruling, through which the court urged the Executive Branch to review the actions of the security forces in the context of social demonstrations. At this point, it is clear that the protocol approved by the government last January 5 in response to the court order, is not sufficient to guarantee the freedom of peaceful assembly and the rights of protesters.