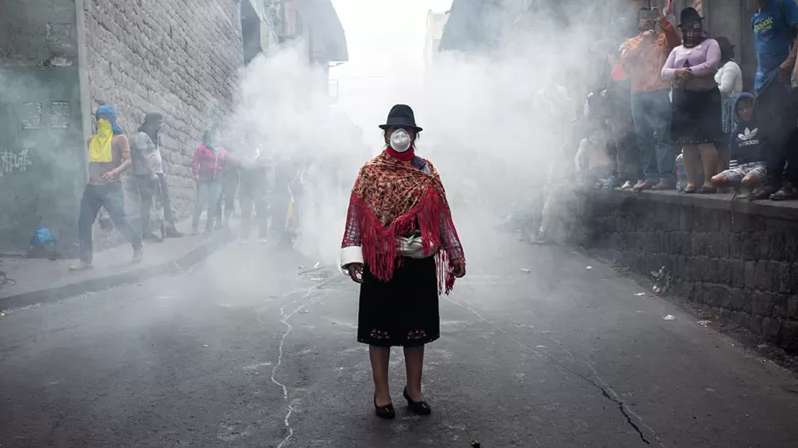 On June 13, a group of civil organizations, led by the Confederation of Indigenous Nationalities (CONAIE in Spanish), called for a national strike to protest against the internal insecurity situation and the government’s economic measures. They demanded the control of prices of agricultural products and fuel, a moratorium on bank credit payments and the suspension of concessions to mining companies in protected territories.

The arrest of the indigenous activist and CONAIE leader, Leonidas Iza, caused an escalation of the situation in the following days, which eventually led to the establishment of a security zone in the metropolitan area of Quito and the declaration of a 30-day state of emergency in the provinces of Pichincha, Imbabura and Cotopaxi, later extended to Chimborazo, Tungurahua and Pastaza. With the declaration, the curfew and the suspension of the rights of association and assembly came into force, although thanks to the social reaction, its scope was limited in the case of peaceful demonstrations. The possibility of applying limitations to the right to information, i.e., the restriction and/or suspension of fixed and mobile telecommunications and Internet services, was also contemplated and discarded.

These measures, far from helping to contain the situation, were followed by an intensification of protests, the death of demonstrators and frequent acts of vandalism. The deepening of the crisis thus brought forward the political decision to put an end to the emergency measures, which occurred on June 25. In short, a maneuver to survive in the face of the possibility of facing a vacancy motion in a Congress that is adverse to him.

In total, since the beginning of the protests, 5 people have been killed, 5 missing, 280 injured, and 158 arrested, as well as 49 complaints of human rights violations by the security forces. Since taking office in May 2021, Guillermo Lasso declared a state of emergency four times. This is not the only case in the region of excessive use of emergency measures. To learn more, we invite you to read this analysis.