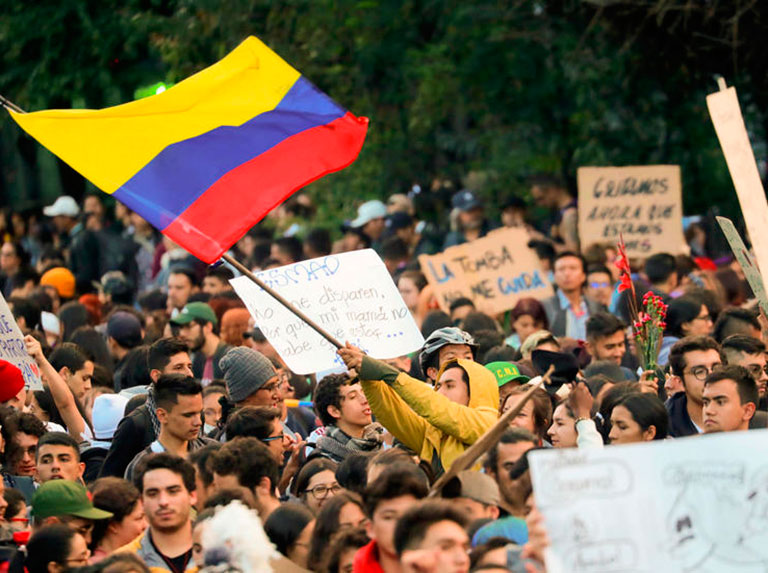 On January 5, the National Government approved by decree a set of guidelines for the use of public force in social demonstrations in order to guarantee citizens’ right to peaceful protest and assembly. After its publication, a group of Colombian civil society organizations published a statement outlining 5 points that were not taken into account (see more in Voices of Civil Society).

The new protocol, which is already in force, prohibits security agents from using firearms during demonstrations and establishes that public force can only be used when other means have been exhausted: dialogue, mediation and prior notice of the use of force. The intervention of the Mobile Anti-Riot Squad (ESMAD, in Spanish) – whose actions have been strongly questioned for leading to the death of demonstrators in 2019 and 2020 – will be a last resort for controlling possible acts of violence.

For their part, organizers of demonstrations must notify the mayor’s office of the date, time and place where protest will take place, unless they are spontaneous. On the day of the anticipated protest, local authorities must form a coordination ‘roundtable’ made up of government delegates, police, organizations behind the protests and other human rights groups.

The measure comes in response to a Supreme Court ruling which, in September 2020, resulted in a lawsuit filed by a group of citizens calling for the Government to review the actions of the security forces. The court then considered that “the systematic, violent, arbitrary and disproportionate intervention” of police in demonstrations had become a national problem.